How many of you/us unholster when...

Getting into your vehicle? Do you unholster your weapon and put it elsewhere in your vehicle either in a holster attached in the vehicle or a cubby or container?
V

i unholster as i enter my truck, and place my gun into a canvas holster and place it in my passenger seat
F

I keep it where it is in my holster on my hip. I can still draw sitting in my car, and it is still comfortable.

No, it's relatively comfortable in my Serpa while driving. On a longer interstate trip I usually put it in the glove box though. But I do wish I did have a car holster as drawing from my driver's seat is no easy task.

It depends on what I'm driving. In the Jeep there was plenty of room, but in the sporty car there's barely enough room for arms, much less arms. I mounted a SERPA holster quick-release to the transmission tunnel with some expanding rubber anchors (sold by BMW and Subaru and probably many others to hold plastic grocery bags). When I moved from the midget car to a Legacy, I put some plugs in the holes and it looked almost showroom stock. 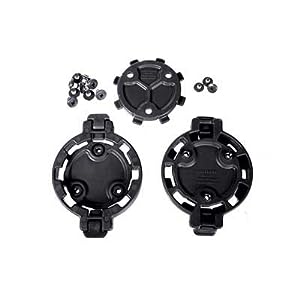 You can see the expanding rubber anchor in the upper left of this pic, I just replaced the mushroom head with a threaded bolt.

I leave my pistol in the holster.It is in a Serpa holster carried cross draw.

Mine stays holstered on my hip. I can draw it while sitting and I don't have to slide it on and off my belt.

I once took an exit off a local freeway after the white line went solid and I was about to miss it. I still have no idea where the Highway Patrolman was, but he pulled me over for it. When this rookie came to my window, I informed him I was packing (I don't always, and can't tell you why I choose to at that time.) Anyway, his reaction is why I usually do not inform anymore. "For Officer Safety" he asked me to step out so he could disarm me. I'm not nearly as smart about this stuff as I am now, let me tell you.

So anyway, this 20-year old kid packing a double-action Sig Sauer, that has probably been the only gun he's ever known, has me put my hands on my head while he tries to extract my cocked-and-locked 1911 from an IWB, while I pray that he doesn't shoot me with it on accident. Finally I asked him if he would just draw the entire holster with the sidearm inside it. He agreed (it's a good thing I'm one of the good guys).

Moral of the story is: If I was a bad guy, I wouldn't have bothered with the 1911 in my IWB. I'd have shot him with the Walther in the unlocked console that he never even knew about.

On topic because: what! you guys don't have a second sidearm for the car?

*I used to make it a habit to inform the officer that I was carrying because I found that I got a lot more warnings instead of speeding tickets that way, believe it or not. I don't get pulled over a LOT, mind you, I'm basing these experiences over the course of two decades. It seems that if the cop has a LEGAL firearm to "deal with", he has spent some time on the issue, and by the time he is satisfied with it, he's had me pulled over long enough that I often got a warning for the actual "crime" I was committing.
Last edited: Feb 5, 2012

jeeper1 said:
I leave my pistol in the holster.It is in a Serpa holster carried cross draw.
Click to expand...

Me too. 45 deg angle. No seatbelt interference. Separate gunbelt also. Pistol/ammo/phone, in that order.

Mine stays in the holster on my hip. This way I continue to maintain custody / control of the weapon.

I have mounted a holster on the center console of my vehicle about four inches away from my shifter knob. I have found that it gives me improved access to it while stopped at "questionable" intersections. It allows me to simply shift my hand a few inches to the right to grasp it should the shoddily clothed off ramp entrepeneur approaching my windshield point anything other than a squirt bottle at me. Unlike those of you who wish to "maintain control" of your weapon, I don't have to lean forward, stick my right elbow out like a chicken wing to avoid interference with the seat, and use my thumb to shift the seatbelt slightly to pry my firearm out from under it, and look exactly like I'm about to draw a pistol from my holster and blast the hard luck window washer to oblivion.

This also has the added bonus of having my weapon discreetly in hand, already cleared for potential use when entering and exiting the vehicle. All it takes is a very discreet (well practiced until it becomes muscle memory) transfer from holster to console when 3/4 of the way entered or 1/4 of the way exited. With practice, it becomes second nature to simply move your hand four inches and transfer without looking while maintaining situational awareness and watching your surroundings.

My state also allows me to do the exact thing the cops do. Keep the handgun holstered and have a loaded (magazine, not chamber) shotgun next to the seat.
Last edited: Feb 6, 2012
D

Sometimes I remove the firearm from my person, if so it is usually put in an even easier to access location.

I keep it where it is in my holster on my hip. I can still draw sitting in my car, and it is still comfortable.

Since I haven't received my CCDW permit yet, I have to put it in the glove box so I stay within the law.
K

Location
Middle of the map, Alabama

The little gun, it clips to the cupholder.

I keep mine on me pretty much all of the time when I am in the car.
1

My OC handgun stays right in the retention holster when I get in my SUV or truck. There's enough room that it can be drawn while the seatbelt is fastened and I always know where it is if I have to make a hasty exit. BUG stays where it is as well.

I'm in a state where there's no requirement to notify in case of a traffic stop. But my concealed handgun permit is tied to my driver's license and tags so they know I might be carrying if they run the tags before approaching the vehicle. Haven't been stopped in several years <knock on wood> so I can't personally attest to how well that works.

I usually carry two firearms while out and about, which helps me not have to relocate a firearm for better access when driving. I carry one of my primary firearms on my right hip (strongside) and a BUG in my left jacket/vest pocket.

I've been wanting to order some of those SERPA quick disconnects for my Blackhawk holster. This way I can carry crossdraw on the SERPA belt attachment while driving. Before I leave the vehicle, I would transfer the holster to my paddle holster located on the other side of my other hip. I have a feeling the bad concealability of the blackhawk SERPA holster would be worsened by the quick disconnects, as they look like they add bulk and push the holster out even more.

I wish SC would allow, or not restrict, unconcealed vehicle carry. That way I could mount a SERPA quick disconnect to my transmission tunnel and have Blackhawk holster mounted there when driving. We're trying to get a constitutional carry bill passed, that decriminalizes open carry, but it doesn't look like it's going to pass.
Last edited: Feb 12, 2012

Usually this is how I am out and about. Instead of the Sex Shooter I’m packing either a 45-1911 or my new 45-Sig Sauer in military web.